Slapping On Some Paint

Have no fear of perfection - you'll never reach it.  Salvador Dali 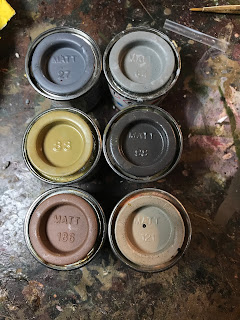 Warning!  This is not a "how to paint figures" tutorial.  Rather it discusses the trials and tribulations of turning the lead mountain in to table ready figures.

When I first started playing wargames as a child the biggest hurdle to overcome was being able to afford enough toy soldiers to sufficiently fill the table for a game.  Every figure purchased or gifted was eagerly painted, based, and on the table in double-quick time.  Now in adulthood, of course, it is different.  My shelves sag under the weight of the great unpainted horde.  I can afford to buy the little lead and plastic marvels far faster than I have the time to paint them.

To compound the lack of time, big battle games need a fair few figures.  My interpretation of Inverlochy has about 500 figures to cover both armies.  The lead mountain is intimidating.  I don't think I am alone here.  Looking at the games becoming popular at the moment there is definitely a move away from big battle games to 'skirmish' games, with reduced head-counts of figures required.    Given enough time I can paint to a table-top standard that I'm happy with, but I realise I am painfully slow compared to hobby friends.  As my Inverlochy project progressed it became clear that, if I was ever to realise my dream of re-fighting Inverlochy on the table top, then I was going to need help.  I was going to have to 'out-source' some of the painting to the professionals.

This was a big step for me as up to this point I had always painted everything in my wargames forces myself.  There is a very strong 'do-it-yourself' and 'do-it-for-cheap' dogma at the roots of wargaming, probably going all the way back to H. G. Wells original book 'Little Wars'.  The good side of this is that the hobby encourages us all to get better at many crafts and skills.  The flip side of this for me was a feeling that I had to do everything myself.  In the end it was a choice between getting things done in a reasonable amount of time, and holding on to the DIY ideal.  Getting things done won! Now, when I look at the progress made after getting help, it was easily worth the investment for me.  (What is more, getting past the first psychological hump of having two small forces table-ready, has encouraged me to go on building my mid 17th century collection.  I am probably more productive now than I have ever been.)

Through recommendations from friends, and also using friends who do a bit of figure painting on the side, I was able to secure the services of a couple of people to help paint my 'mountain' at a cost that seemed reasonable.  It needs some time and effort to find the right people, and also to agree the style and colour palettes I wanted to be used.  Also people aren't necessarily familiar with 17th century fashion.  But it was definitely worth it in the end.  A mountain of lead was eventually turned in to two table-top armies.


I decided to keep the basing of figures 'in-house', so to speak.  I also added the pikes for the pikemen, and the Colours for ensigns or cornets (see a future post for more details on flags).  This has helped me maintain a single overall 'look' to the armies.   I have done some of the figure painting myself.  I do enjoy the painting/modelling part of the hobby, and so I kept favourite parts of the miniature armies to paint myself; mostly command groups, vignettes, and artillery.

Here's an example of one of the command groups I painted.  None other than Alasdair MacColla, the 'Devastator'! (More on him in a future post.) 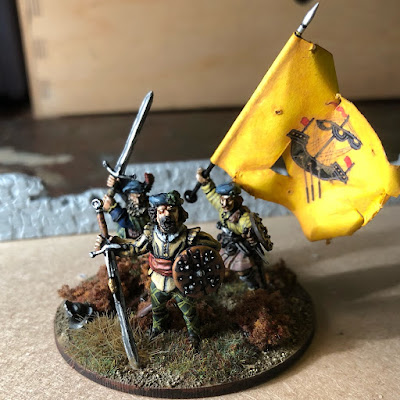 When I started this project I was still a died-in-the-wool enamel painter.  White Spirit fumes were part and parcel of the job of painting for me.  I had a set of colours, built up over many, many years that I was happy with.  All of my gaming buddies switched to acrylics years ago, but switching was just too big an effort for me.    Despite that fact that many of the figures were not painted by me, this project has gotten me far more in to the paining and modelling scene.  Eventually I decided I would give these new fangled acrylics a try.  A starter box of 16 Vallejo colours got me going.   Twelve months after the initial experiment I can now say that I have fully made that switch.  I even use a wet palette!  I do really like how easy it is to squeeze out a few more drops of paint from a dropper bottle.  I'm still building up that repertoire of colours, but I don't think I will go back now (Humbrol Enamel Matt Black 33 is a great brush-on undercoat however!).  I don't think my figures look any better (yet) but it is easier / faster, and my white spirit habit is receding :-).

This picture also shows an example of my basing.   I used Warbases for all of the bases (https://warbases.co.uk).  Great company.  Super product and very helpful team.  I like the 2mm thick stuff they do.  My post on Building the armies (http://battleofinverlochy.blogspot.com/2018/08/building-miniature-armies.html) covers the details on frontages etc.  For the command bases I typically use circular bases, and use whatever size fits the vignette that I have tried to create.

The painted figures are varnished and then glued to the MDF bases.  Following this a mixture of PVA glue, filler (known as spackle in the USA), and acrylic paint is liberally applied to hide the figures' bases, and sharp sand sprinkled on to the still wet mixture.  When dry this is highlighted.  Once the highlight is dry (very important to let it dry!) then static grass and hobby bushes are added with the help of thinned PVA glue.  Finally the base edges are tidied with a dark brown marker pen (I found black a bit too contrasty).

For bases I can't find a better colour than Humbrol Matt 29 Dark earth.  I have used it in enamel and acrylic (and spray can).   I haven't found another paint to match it.  I highlight this with cream or beige.   I used Army Painter Steppe Grass for the static grass.  Quite a dark blend, but seemed to fit right for the Highlands of Scotland in a wet February.  The 'bushes' represent the dried out heather which goes brown in the winter.  Busch Brown (3 Colour) Foliage is the best I have found so far.  Amazon stock it in the UK.

A final word on varnishing.  I prefer a nice matt finish.  At the start of the project I was using Humbrol Matt Coat.  I have gone off this.  Perhaps I've had a bad batch but this doesn't seem as good to me as it once did.  MacColla above has already started to go a bit shiny.  I prefer to brush on my varnish, and I am now a convert to "Daler Rowney Varnish: Acrylic Matt Varnish".  Very matt, very good (also available from Amazon)!  You do need to give the bottle a blooming good shake though.