"Troops who march in an irregular and disorderly manner are always in great danger of being defeated."  De Re Military by Vegetius. 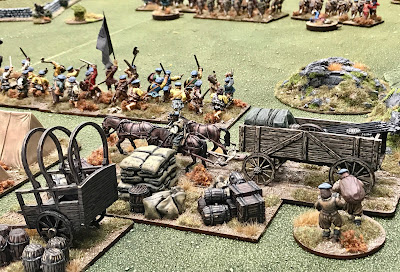 This blog entry covers my rationale for how I formed the units of miniature figures to represent the two armies.

When deciding how to represent units on the wargames table a number of things have to be taken in to account;  figure size/scale, figure ratio to actual unit strength, wargames rules, and most importantly what looks pleasing to the eye.

When I first imagined wargaming Montrose's battles it was always going to be in God's own figure size, 25/28mm.  The real armies are small enough that this figure size is easily feasible in terms of cost and size of table, and nothing beats the look of a nicely painted 28mm figure.  There are also lots of manufacturers of figures and terrain in this scale.  We are living in a golden age for wargamers and we really are spoiled for choice.

My next step was to work out what size and shape of unit would like nice, to me, when placed on the table.  I emphasise "to me" as this really does boil down to personal taste; with this taste being based on our experience of playing games and the influence of the wargames eye-candy we come across at shows and in the wargames press.

It seems to be the 'norm' (down our way any how) to base 28mm infantry figures four to a square base, in two ranks, each of two figures.  Therefore, as a starting point, my infantry units are going to be made up of these four figure bases.  In this period of history regular infantry units were typically made up of one-third pikemen (pike) and two-thirds musket-men (shot).  The shot was typically split in to two 'wings' which were formed up on either side of the central block of pike.  On this basis a wargames unit of mid 17th century soldiers can be represented with six x four figure bases of shot and three x four figure bases of pike.  Three bases of shot formed up on either side of the pike shot then looks pleasing to my eye, and seems a very common approach taken by other wargamers in this period.  It looks something like this.

The observant will see that I have already departed from my starting point as I have 3 ranks of figures in the unit of pike.  This is based on the colour parties (the chaps carrying the unit's standard and those charged with protecting them) being formed with the pike rather than the shot, and also because I just think it looks nice to have slightly deeper pike blocks!

At this time in the 17th century the infantry typically formed up six ranks deep, both pike and shot.  Even with a small battle like Inverlochy (less than 5000 men in total) it will be necessary to have a figure to real men ratio of something like one figure to ten or twenty real men.  This is so we can fit the battle on to a reasonably sized wargames table.  Therefore we have perhaps 36 figures representing 500 men.  So the figures take up an area approximate to the real men they represent I'm happy using two or three figure ranks deep to represent six real ranks as a necessary wargames abstraction.

This regular infantry formation suits the Irish brigade regiments in the Royalist army, and the lowland  regular infantry battalions in the Covenanter army.  However, one of the things that drew me to this battle was the fact that both sides also have lots of irregular highland infantry.   These would be fighting with, for the most part, what ever arms they possessed.  They would be drawn up behind their clan leader in loose formations and would not be fighting in regular ranks and files.    If I used my 'standard' two by two, four on a base method then these highlanders would look too regular.  My standard four figure base is 40mm by 40mm which doesn't leave enough room for 28mm figures to look like a disorderly rabble.  I was discussing this conundrum with another Friend of General Haig (our wargames club) who suggested making the bases deeper than normal.  I liked this idea and went step further and went for 60mm by 60mm bases on which I would fit six figures.  This allowed plenty of room for a nice rabble effect, and handily meant that I was sticking to 20mm frontage per figure so that I could match frontages where necessary.

Some rules put highlanders in deep formations.  This is probably right for the moment that a charge swept in to an enemy unit.  As the irregular unit charged forward some would run faster and the less quick, or less eager would fall in behind leading to a ragged column by the time of impact.  However, information form the 1745 period suggests that 4 ranks was the standard formation for highlanders to form up in.  Gentlemen in the front rank, and 'arrant scum' filling up behind.  Therefore the highlanders would be in wider formations to begin with.  Allowing the highlanders to form up in something akin to an assault column from the start also makes them very manoeuvrable, something that these ill-disciplined troops shouldn't benefit from.  I decided to make up my highlander units of four bases of six by six figures.  This would make them suitably unwieldy and allow them to be out manoeuvred by a skilful, regular opponent.

The picture above shows two such highland units on the table-top, supported by a regiment of Macolla's regular Irish.

There was only one small unit of cavalry at Inverlochy; the independent troop of horse led by Sir Thomas Ogilvy.  This was a small unit of 50 men.  I chose to represent this with 8 cavalry figures.  Any less and it became a bit lost.  I used to base cavalry two figures to a 50mm by 50mm base.  Horse models seem to have become longer and so I have moved to 50mm wide by 60 mm deep now.  I form the unit 4 figures wide by two deep.

I hope this meander around how I have formed the wargame units to refight Inverlochy is useful.  Very much of this is just down to personal preference, so take or leave what you will.

Posted by Friends of General Haig at 18:36