Alasdair, son of handsome Colla,
skilled hand at cleaving castles,
you put to flight the Lowland pale-face:
what kale they had taken came out again.
'The Day of Inverlochy' by Iain Lom McDonald 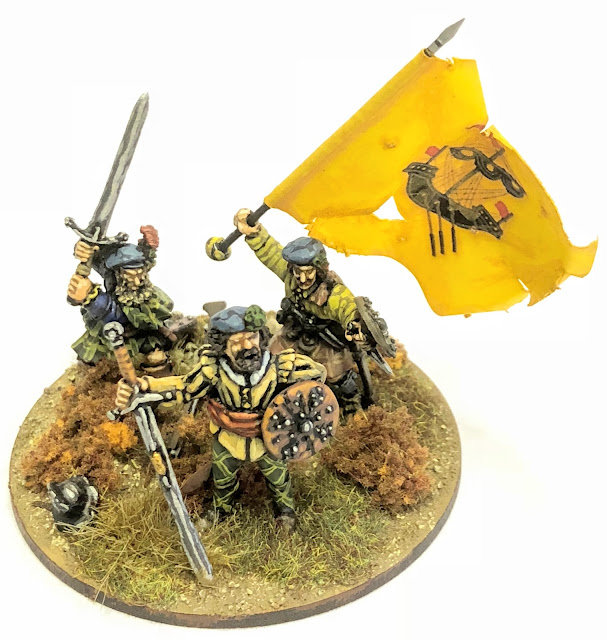 Alasdair MacDonald, or MacColla, was the archetypal Highland hero who in 1644 through 1645 led the Scots Royalist 'Irish Brigade' in the ‘year of miracles’.  His story would make one hell of a Hollywood blockbuster, and it was reading his biography by Stevenson that started my interest in collecting a Scots Royalist army.

Finding a suitable figure to represent MacColla in my wargame army was going to be a tall order!  Both Eureka Miniatures and Warlord sell figures aimed at representing MacColla, but neither of these figures really did it for me.  I was therefore left with having to convert something.  The MacColla figure had to be tall (his was alleged to be a giant of a man), and have a definite Scottish feel.  I also wanted to represent his claymore that, according to legend, included a sliding weight to add that extra bit of impact to any strike.  Although quite probably a fantasy this ‘vorpal’ blade would really set off the figure.  This final figure is made up of a Eureka figure, two separate Foundry figures, a TAG figure, and some Green Stuff.  I think the resulting figure looks suitably commanding, and should strike fear in the hearts of his Covenanter enemies. 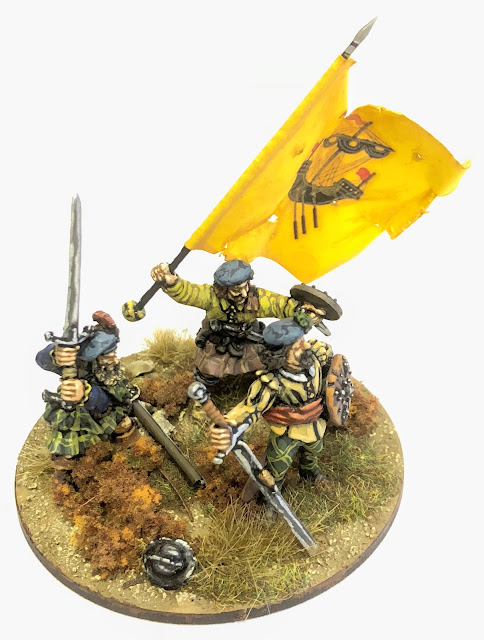 To accompany MacColla I used two of Warlord’s brilliant highlander range.  These two represent MacColla's bodyguards: Dubhaltach MacPhee and Calum Mor MacInnes.  (Probable translation: Black-haired MacPhee and Big Calum MacInnes!)  I have one wielding his own deadly claymore (from the Warlord MacColla figure pack) and the other (converted from a normal Warlord highlander) carrying MacColla’s yellow colour, inspired by the wonderful Project Auldearn blog.

MacColla was the younger son of a clan chief, of a minor MacDonald sept.  Hi father was known colloquially as Colkitto, or Coll Ciotach in Gaelic.  Colkitto would be worth his own Hollywood movie, as he probably got his epitaph for being crafty!  Being a MacDonald aye this time meant that Colkitto and his family were arch rivals of Clan Campbell, and were always at odds with the Campbell chief, the Marquis of Argyle.  Colkitto, and his sons, feuding with Argyle and the Campbells led the them spending a lot of time imprisoned by the Campbells.  No surprise then that MacColla spent a lot of his early adult life with relations in Ulster, away from Argyle’s power base in the Southern Hebrides.  It is in Ulster that MacColla learnt his trade as a soldier.   As a large and imposing figure, he quickly gained a reputation as a fighter, and he seems to have also developed in to an inspirational leader and a canny tactician.

At the start of the conflict in Ulster MacColla was fighting in a mixed Protestant-Catholic force against the Catholic rebels in Ulster.  He had some notable successes in the smaller scale actions there and is sometimes credited as creating the infamous highland charge; a single, close range, volley of fire, followed immediately by a charge to contact. (Even if this tactic was introduced to the Scottish Highlands by MacColla, it is likely that it originated in, and was brought back from, the fighting in the Thirty Years War on the continent.)

When the Scottish Covenant government, led by non-other than Argyle, sent forces to support the Protestants in Ulster, old rivalries came to the fore and MacColla was forced to switch sides to the rebels to save his own skin.  He was warmly welcomed by the rebel forces, along with his followers.  When the leading Royalist in Ulster, the Duke or Ormond, raised a brigade of infantry to send to Scotland MacColla was the natural choice to lead them.

After landing in Scotland, despite his fighting credentials, MacColla wasn’t perceived by the Scottish highland chiefs to have sufficient authority to lead a war in the King’s name against the Covenant government.   Providence then brought MacColla and Montrose together.  Montrose, as the King’s Lord Lieutenant, brought the required legitimacy, and Montrose desperately needed MacColla’s men.  Over 1644 and 1645 Montrose and MacColla combined ran rings around the more numerous, and supposedly more professional, Covenant forces sent against them.   History remembers the noble Montrose as the sole leader and military genius behind the victories.  What part did MacColla have to play in the victories?  Well that makes a fine topic for wargamers’ discussion, preferably over a wee dram! 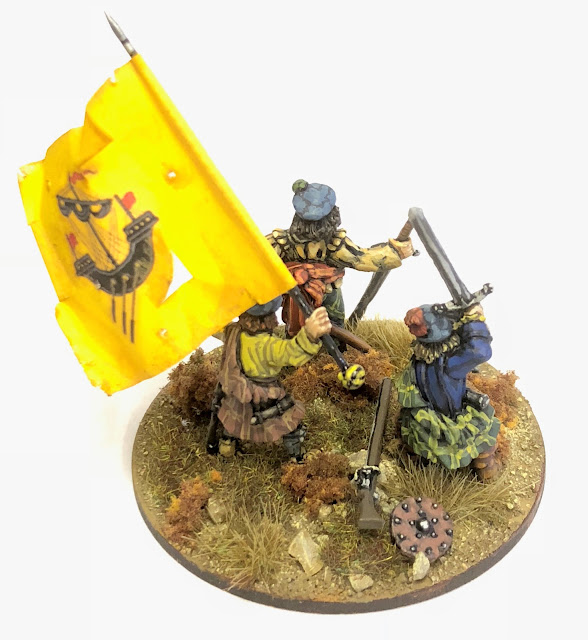 Until next time - Alba gu bràth!

Posted by Friends of General Haig at 20:47