"Speed, bonnie boat, like a bird on the wing,
Onward! the sailors cry;
Carry the lad that's born to be King
Over the sea to Skye."
Lyrics to the Skye Boat Song by Sir Harold Boulton 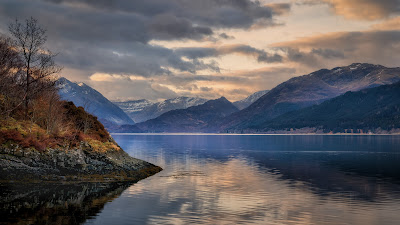 I remember learning the Skye Boat song as a 'wee nipper' at school.  Perhaps my fascination with the Stuarts goes back to this point!   The Scottish west coast, with its Hebridean islands such as the Isle Skye, continues to hold a romantic attraction in popular culture, and remains a destination with a wild and untamed beauty.   The mountains, glens and islands of the west coast have always been a place apart from the lowlands; an area joined together by the sea and sea-lochs, rather than by roads.  Inverlochy lies at one of the important entry points to these salt-water routes.

This is an area where any significant travel, before the modern era, could be faster by boat, rather than by land, across the trackless mountains and glens.  Sea power had controlled the west coast and the isles even before the coming of the Northmen who settled there with their longships. The descendants of the Northmen and the islesmen had evolved the famous 'Viking' longship in to the highland galley, or Birlinn, a Hebridean vessel also powered by oar or sail.  Birlinns were able to beach on most shores, and provide speedy travel around the whole north western sea-board of the British Isles.

By 1645 sea power had shifted to the bigger and better armed square rigged ships from the South.  The local Hebridean birlinns were no match for square-riggers in the open seas, but were still very handy in-shore craft.   Easily able to cope with the shallow lochs to the open firths, birlinns were the ultimate way for a western clan chief, and his followers, to travel.

No surprise then that in 1645 the Marquis of Argyle had the largest and best equipped birlinn on the West coast.  Why suffer the discomfort of riding over the rough terrain when you could cruise in comfort up Loch Linnhe to Inverlochy castle by birlinn.  Inverlochy castle, like many medieval Scottish castles, was built with easy access to the sea-lanes.  The castle stands at the mouth of the Lochy river ('Inver' meaning mouth or estuary) where it flows in to Loch Linnhe, providing easy access to the loch, and sea beyond.

At the start of the Battle of Inverlochy, Argyle, at the entreaty of his followers, retired to his birlinn moored on the nearby Loch Linnhe, to watch the battle in safety.  Allegedly, Argyle had fallen from his horse a few days earlier, dislocating his shoulder, and this was the reason given that he could not take part in the battle. 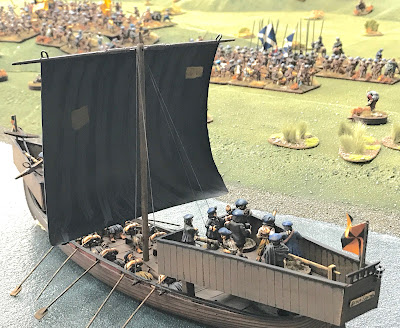 At full sail, and under oars, Argyle's Birlinn glides along Long Linnhe, while on the shore the Campbell army prepares for the onslaught.

Argyle's birlinn, moored on the shore of the loch next to the battlefield, was an iconic part of the battle for me, so I had to ensure the terrain included some of the waterways, and I was going to need a boat.  Ships and boats in 28mm are becoming more popular but there isn't yet a commercially available birlinn.  I was going to need something scratch-built.  The obvious place to start for the hull was a viking longship.  As mentioned above, the longship is the ancestor of the birlinn and for my purpose would work well.  There are mdf and resin hulls available from some wargames manufacturers, but I thought the Revell model kit would provide something of the right size (it is a 1/50 model which is close enough to 28mm) and it is also a plastic kit so is great for conversion.  Stocked by Warlord.  https://store.warlordgames.com/products/plastic-viking-ship . 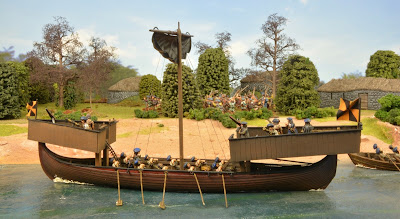 With sails furled, the oarsmen take the strain, easily outpacing the smaller craft to aft.

At this point I was very lucky to be able to hand-off the Birlinn project to one of my best wargaming buddies who is an absolute modelling whiz, and also loves all things nautical.  He borrowed a couple of my books on birlinns, and then we kicked around some ideas for what Argyle's birlinn might have looked like.  We decided to have some small 'castles' at the bow and stern to emphasise the grandness of this birlinn.  (This matches much of the birlinn art seen on medieval Scottish coins and heraldry.)  My buddy then went to work on constructing the final piece.  Apparently the most challenging part of the build was converting the Revell hull to be a waterline model.  In the end this was done by hand, with a fine saw.  A tiller and rudder were added, and then minimal rigging.  (Full rigging this sort of model makes it almost impossible to game with.)  The sail was designed to be removed so that it could be shown set, or furled.  (This is how it comes in the kit - well done Revell!)   Most of the crew are Scots artillery crew or officers.  Some Dixon 19th century navy rowers were converted to Scots with Bonnets for the oarsmen.  Highly speculative, but possible, are a couple of swivel guns.   A smaller tender was also added, to allow Argyle to come ashore in comfort. 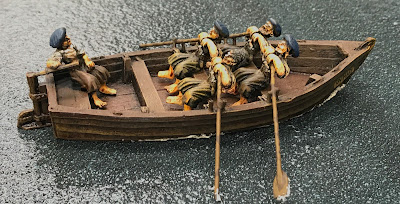 The sails were painted black.  This was to represent the description of Argyle's birlinn setting sail, to escape from the battle, like "a great black bird of ill omen".  A Campbell banner with the black and yellow gyronny pattern was also added.  The finished thing is a fabulous model and sets the whole battle off very nicely.  A totally unique piece.  A massive thank-you to Dave!  May your modelling knife and paint brush long continue to inspire us.

At the end of the battle of Inverlochy, the last resistance of the Campbell clansmen was clustered around Auchinbreck and the Campbell banner.  Finally the banner dipped, Campbell morale was broken, and all that was left was for those who were still on their feet to try and escape the Royalists.  However, with the river and loch at their backs many Campbells found themselves trapped.  Some tried to swim the freezing waters, but any hope of rescue from their chief was dashed as Argyle's birlinn set its black sail, and escaped down Loch Linnhe, away from the fateful scene on the shore.  Argyle's birlinn had saved him, but the manner of his departure did nothing to improve his reputation, at the time, or since!

I hope you will be tempted to add a nautical element to your battles with Montrose and MacColla.

Until next time!
Posted by Friends of General Haig at 22:38