The Tyranny of Choice

“The onus of supply rests equally on the giver and the taker.” General George S. Patton 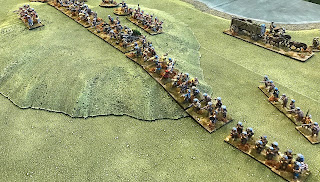 In this post I’ll go through the figure manufacturers that I’ve used.  I like variety in my wargames units and so I often find myself using multiple manufacturers.  I know that many people pick a single manufacturer's range and then stick with that.  However I like an irregular look to my units so normally end up with a mixture.  If I can build a unit without a single duplicate figure in it then I am a happy bunny!

The ‘English Civil War’ is now a well supported period by figure manufacturers and even the fringe parts of the conflict, like Montrose, are covered.  I never expected to use a single source for my Inverlochy battle, but I perhaps didn't expect to end up covering quite so many.  Perhaps this is the collector coming out in me.  Here are the manufacturers I’ve used, presented in the order I started buying figures from them.  I bought the first figures in the early 2000s; this has been a slow burn project!

Please note; what makes a nice war game figure very much comes down to personal choice.  The views below are just that.  I would suggest anyone gets a few samples of a range before jumping in and making a big order!

Foundry’s ECW range, sculpted by the Perrys, was ground breaking when in came out in the late 80s (or was it the 90s?).  Historically accurate 17th century soldiers!  No more musketeers in lobster pots or left handed pikemen.  It is still a quite extensive range with lots of diorama fillers included as well. Most importantly for me it includes a good selection of Highlanders.  Indeed, until Warlord came along, The Foundry Highlanders were one of the only choices in 28mm.  The sculpting style perhaps looks a bit dated now, but I have a huge fondness for these characterful figures.  Any foray in to this period by me is going to include at least a sprinkling of Foundry.  Still one of the limited number of places to go for period dead horses and artillery limbers!
https://www.wargamesfoundry.com/collections/english-civil-war

Old Glory 25s are sold in big packs and I at first hoped that their ECW Highlander packs would bulk out my Foundry Highlanders.  Although they fit with Foundry size wise, their style doesn’t suit me.  I have only used 1 or 2 figures from the packs I bought. Not recommended.
https://www.oldgloryminiatures.com/products.asp?cat=202

“Do they have an ECW range?” I hear you cry.  Well, no, but they have a very nice ‘45 collection including Highlanders. Very minor conversions may be necessary but they fit size wise and include some nice wounded/dead figures.
https://www.frontrank.com/product-category/18th-century/jacobite-rebellion-1745/jacobite-army/

I can’t say enough good things about their English and Scottish Civil War ranges. They are just lovely.  I understand that they set the size of the range to match their earlier Foundry work which perhaps makes them on the small side for today’s 28s.  My only regret is that they didn’t do more Highlanders.  I can’t consider a regular foot or cavalry regiment without including some of these.
https://www.perry-miniatures.com/index.php?cPath=23_40&osCsid=1noamuqhmlilhs87j3c17i5935

Just as I was starting to think about this period a discussion thread on the old WECW Yahoo Group started about this mysterious antipodean company who make figures on demand.  All you needed were enough advanced orders.  Walter Morrison, from the wonderful Project Auldearn blog, was the driving force behind getting a range of Irish and Stettin based Highlanders produced. I happily invested in the venture and a nice range of figures were produced. (See Project Auldearn for superbly painted examples.)  They fit well style wise with the Perry figures. I think they are a bit small though. Even compared to the already small Perry figures. I have used some of these, especially the Irish brigade figures (which are not so small) but few of the Highlanders.  If you are using mainly  Perry then I recommend the Irish Brigade figs. from Eureka. Otherwise I think you may find this range too diminutive.
http://www.eurekamin.com.au/index.php?cPath=87_126_731&sort=3a

My whole project stalled for some time, partly due to a lack of being able to find enough figures that I liked enough.  Then came Warlord games, galloping to the rescue like John Wayne in a Western movie!  Luckily for us 17th century wargamers, John Stallard at Warlord is a huge ECW fan, with a special interest in the war in Scotland.  So, as well as plastic box sets for generic infantry and cavalry we also got superb metal ranges for the Irish Brigade and (be still my beating heart) Highlanders! Hoorah!  These ranges re-started this whole period for me.  They fit well with Perry and Foundry and so Warlord have become the biggest proportion of figures in my collection.   Needless to say, highly recommended.
https://store.warlordgames.com/collections/pike-shotte

Some highlights of the Warlord range.  Many of the Highlander and Irish are available as box sets and as individual figures! Yes, you read that correctly, individual wargames figures.  Not very common nowadays.  Perfect for getting your wild, irregular clan looking just right.  The plastic cavalry horses are great figures and size wise more accurate than most metal ranges.  I wanted to be able to show a difference in horse size between the large English Hunters and the smaller, wiry Highland nags.  So in my collection well mounted cavalry get Warlord plastic horses, and others (Scots, dragoons, etc) get Perry horses.  The plastic ECW sets are also great for conversions and Warlord do lots of nice metal extras such as Scots bonnets and lances.  Warlord also have a great range of civilians; who doesn’t need a Hedge Harlot for their camp followers?!

Quite tall and so don’t fit well with my preferred Warlord/Perry/Foundry.  I have a few Redoubt civilians from their Three Musketeers range. Useful.
https://www.redoubtenterprises.com/product-category/musket-pike-shot/three-musketeers/musketeer-figures/

A very complete range. On the big side so don’t fit well with my collection. I have included one or two as “the big lad” in the company.  They are a bit mixed. Some are gorgeous sculpts, some not so much.  If you are going for the bigger size of 28mms then this is the range for you.
https://www.bicorne.net/acatalog/English-Civil-War.html

TAG have a nice Scots range and also a Thirty Years War range.  They fit size wise with Warlord/Perry/Foundry.  Some of the sculpts don’t do it for me, but others are great.  I have just one or two of the command figures. They have some nice mounted officers, but I’m not keen on the horses.  Worth checking out. They have a well illustrated website.
https://theassaultgroup.co.uk/product-category/renaissance/scottish/

So that is it.  Probably not a complete run down of all mid 17th century 28mm figures, but I think there is probably something there for everyone.   Although I have enough figures table ready for Inverlochy, I am (of course!) still buying figures.   Packages from Warlord, Perry and Foundry still arrive at my house with alarming regularity, so I would say these are the top three, respectively.
There are some interesting new manufacturers from Eastern Europe appearing that have some tempting ranges.   I'll wait to get some in my mits before commenting further.  The pictures I have seen look astounding.  If you have any recommendations then please post in the comments.

Posted by Friends of General Haig at 22:07